At the Komikon Summer Fiesta 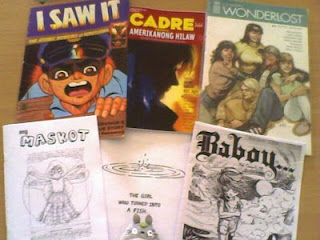 Went to the Komikon late in the afternoon. Was planning to live tweet but mobile's battery died early. Managed to get a handful of local titles: Cadre: Amerikanong Hilaw, Baboy, The Girl Who Turned Into a Fish, and Ang Maskot. I'm liking the latter very very much. Very clean, tight panel planning, enjoyable and endearing story. Loved the set of bloopers in the end. Sushyal yung little bird. Hehehe.

Don't have time right now for a full review. But I peeked at the creator's blog and he describes the process how he made "Ang Maskot" in Adobe Illustrator. Would love to see more from this particular writer/artist.

Also picked up Wonderlost # 1 in one of the sale bins.The blurb says it's a cross between Fast Times at Ridgemont High and Mean Girls. Browsed a couple of the stories already. It's all about growing up in that hazy, romantic time called the '80s, full of U2 circa Joshua Tree references. The biggest pull for me was that these are autobiographical stories. Very interesting so far. Searched Cebulski's blog and found out there's been a #2. Will be on the lookout for that one.

Then there's "I Saw It: The Atomic Bombing of Hiroshima" (aka "Ore wa mita") by Keiji Nakazawa. It's subtitled "A Survivor's True Story," and Last Gasp tells us that Nakazawa wrote and drew this comic book in 1972 about his own life and experience in Hiroshima before, during, and after the atomic bombing. It's a single-issue comic, but his editor encouraged him to expand it into a long form work, which is how we got Barefoot Gen. In it, he rages not only against the bomb, but also at the militarists who led Japan into war. The artwork reminds me of Simba the White Lion crossed with Voltes V. Best of all, I got it for twenty pesos. :)

It was also announced that there will be another Komikon around October, and this time in a bigger venue. That means will just have enough time to read and recover from this event. Here's hoping that will have more finds (and funds to buy the finds) later this year.
Posted by kantogirl at 11:35:00 PM
Labels: books, comics, komikon